For all the non-medical readers, the title is not something I made up just to arouse your curiosity. Unfortunately, we had a patient of middle east descent recently who presented to us with a large growth in his perineal area (close to the anus). 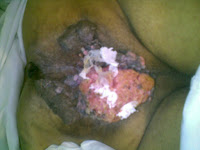