Before I begin, I must thank Jeffrey Leow for the mammoth effort of putting together a carnival so unique that it actually unites Medico's from around the world to put forth their thoughts and blogs in the form of a carnival - SurgeXperiences! Apart from this being a collection of experiences (as the name suggests), it makes for fantastic reading and at the same time is hugely educational!

The current edition - 315 - is being hosted very capably at my colleague's Education Of a Knife. The next edition comes up right here on the 7th of February. This will be the first time I would be hosting a carnival of this kind, so I request you to bear with any untoward mistakes / misgivings, as I am still learning the ropes! 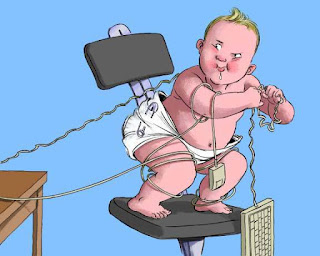 Submissions can be made here via this form and the deadline for the submissions would be 5th of February!

At this point, all I can say is that I would try hard to keep up the quality of SurgeXperiences by collecting the best readable posts there are to make 316 a successful edition as all the others in the past have been.

Interested readers can catch up on past issues here while reading the current episode and gearing up for the next post!

If you would like to be the host  for SurgeXperiences in the future, please contact Jeffrey Leow.
3 comments:

Most women have issues with fibroids. Mainly brought into the light when fertility issues crop up, fibroids can range from small inconvieniences to large 3kg masses obstructing everything in its wake!

Up until recently, the naughty fibroids were meant to be removed and the only way to do this was surgery. In places like our teaching hospitals and rural set-ups, this became an excuse to carry out surgery to "teach" and "learn". In older women, the decision was easier, albeit drastic. Remove the entire uterus along with the tubes and ovaries. So much so, that most women in some villages I know, even went forth for hysterectomies just to get rid of the uterus which was shown to them to be problem centres by people unknown. 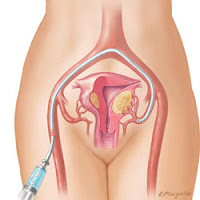 Uterine artery embolization was introduced in the United States in 1997 and was one of the first nonsurgical treatments for fibroids. The procedure involves introducing small pellets into the arteries that feed fibroids to choke off their blood supply. Without blood, most fibroids shrink dramatically within six weeks, but relief from symptoms usually occurs much earlier. Uterine embolization appears to be a good option for women who aren't concerned about preserving fertility and are looking for a minimally invasive treatment for symptoms associated with fibroids.

To me, this is good news. Not just for the fibroids. I would love to experiment with the treatment and try and see if it would work for other growths as well. A very very wise Gynaecologist mentioned to be that if it works for a fibroid in the uterus, it should also work for fibroadenomas in the breast. What a wonder it would be for all women who could get their fibroadenomas treated without a scar mark on the breast!


Isn't it worth a try before getting fibroadenoma surgery? If it doesn't work, you can always go ahead with the surgery as planned! Would you consent to a new experimental treatment provided the doctors assure you it can cause no harm??
No comments:

Why we require to do a thorough Physical Examination every time.

A patient from out of town was in the clinic the other day with complaints of an unyielding fever and chills. She was a diabetic and usually was under good control. She was also obese and was considering bariatric surgery. On examination, she seemed to be fine other than the fever and a mild congestion. She was put on antipyretics and told to follow up again in a day or two.

She came back and the fever was higher. It had not gone down to normal at all. This time, we were sure that we had to find the focus of infection, it had to be somewhere. We did what we should have on the first day. Took a more detailed history and did a complete physical examination.

It was carefully tucked away, hidden by her overweight thighs, at the perineum. It was an acute perineal abscess. It was inflammed, almost pointing, gasping, waiting to be let out. She needed an incision and drainage and we knew it. Her blood sugar was high (as expected). We did the surgery, she felt better and was able to travel back to her home town in 2 days.

The question here is, should the patient have come clean about the boil she knew was festering in her perineal region (undoubtedly a very private place but....) or should we have insisted on a complete exam? The thing is, in India, where cultural influences are so strong, almost all women and most men will still not feel comfortable about their bodies being exposed even if it is for medical purposes!
In the west, I assume the Doctors are more cautious, what with the malpractice race closing in on them all the time. Here it's more the patient's unwillingness to admit something could be wrong in "that" region.

I would love to have a middle ground and say that its our duty to inform the patient that a complete medical examination is required, but how many would agree to strip down completely for 'just a fever'??

Eclipse over the blue moon.

This new year's eve was a special day for more reasons than one. It was supposed to be a blue moon, a rather rare event wherein there is an "extra" full moon in years that have thirteen full moons. Supposed to be quite beautiful and all. Oh wait, I just realised that's where the expression once in a blue moon comes from! The other thing special about the day (actually night) was that over parts of India, we were to experience a lunar eclipse over that very blue moon. 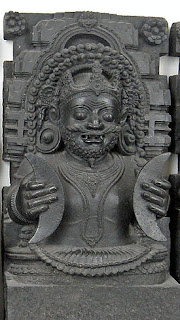 Rahu holding the sun and moon

India is and always will be a place with strong links to astronomy, astrology and the inevitable superstitions that come along with mysticity (didn't even know if that was a word, I had to look it up). So, the eclipse is said to occur when Rahu and Ketu swallow the sun. In Hindu mythology, Rahu is a snake that swallows the sun or the moon causing eclipses. Ketu is generally referred to as a "shadow" planet. Astronomically, Rahu and Ketu denote the points of intersection of the paths of the Sun and the Moon as they move on the celestial sphere.

According to legend, during the Samudra manthan, the asura (demon incarnate) Rahu drank some of the divine nectar. Before the nectar could pass his throat, Mohini (the female avatar of Vishnu) cut off his head. The head, however, remained immortal. It is believed that this immortal head occasionally swallows the sun or the moon, causing eclipses. Then, the sun or moon passes through the opening at the neck, ending the eclipse.

Who can argue with that, right? What happens then during an eclipse even in modern homes in India is that people avoid eating during the eclipse, lie straight on the bed, don't move out of the house and some even take a dip in rivers after its over. Pregnant women are to follow this to a T and some husbands are forced to do it too!

Some other popular myths are:

How much of it do you believe?