Sit on a Seton.


One of the ways to treat this is a Seton Stitch!  The procedure involves running a surgical-grade cord through the fistula tract so that the cord creates a loop that joins up outside the fistula. The seton loop will slowly cut through tissue inside the loop while scarring behind the loop, essentially "pulling out" the fistula without surgery.


Now to put forth a human perspective and what the patient feels. This man had a high fistula and to complicate things he also had Grade II Haemorrhoids (Piles). He was in pain due to both of the above conditions. He had already undergone a surgery for the fistula once somewhere in Bangkok, but it had recurred. I'm assuming that this was so because they must have not realised how high it actually was at the time of surgery. This is what he had to go through. Keep in mind this is what we Surgeon's do for a living!


1.) Get examined with a proctoscope

2.) Have some methylene blue (ink) injected into the fistula 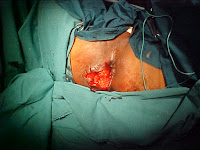 5.) Take Sclerotherapy Injection into the Piles


Only Steps 2-4 get anaesthesia. The rest are to be tolerated.


Can you imagine how painful it must be?

The person we operated on today was done under sedation and local anaesthesia and he was still howling in pain. We couldn't do much more for him as he was unfit for general / spinal anaesthesia. Such is life.
2 comments:

Assuming everyone who can read has read Harry Potter, I am relating this past week's experience to he who must not be named! We had a patient who underwent a SILS Laparoscopic Sleeve Gastrectomy last week. The surgery went off well and the patient tolerated the anaesthesia and post op pain quite admirably. The visit in the evening led to this post.


I went to see her to check that everything was well. She was made to go to the toilet, sit up and even walked a bit. She had some amount of pain which was understandable considering her surgery was performed only hours earlier. She also had a very dry mouth, again obvious, since she was still nil orally post op. She was permitted to gargle and moisten her lips.

I was waiting outside whilst she was doing this and suddenly her siblings comes running up to me and exclaims, "There's something wierd coming out of her mouth, it looks like a snake or something." Not one to miss out on an opportunity to see something this dramatic, I went on inside, not alarmed but mildly curious.


The patient's face was a picture of perplexity as she proceeded to stare at me and tell me that something funny was coming out of her and were we sure the surgery went of well! I asked her to open her mouth.

Sure enough, looking me straight in the face, swollen to a certain extent, her mouth opening in a way that made it seem to be projecting outwards, hence resembling the dreaded 'nagina'  was what she perceived to be the snake of her insides....
Her Uvula!

P.S. At least it didn't look like this!
4 comments:

Its been quiet for a while now, but you can always expect things to get interesting when you're working in surgery! This is an incident involving a lot of fat.

A man came to the clinic the other day with a very simple request. He had a swelling on his forehead that he wanted to get rid of. Fairly straightforward lipoma, I thought. We had a discussion and he was fine with everything and fixed a time for the surgery. He clearly was happy with what he heard because he then showed me his hands. He had the same type of swelling on both his forearms. He wanted to get those out too. Fine, I said. More for me to operate on!

He then turned around and shifted through his hair and showed me one more at the back of the skull. I thought this would be a cyst (as is most likely in that area), but it too felt like a lipoma.

By now I was sure that there would be more so I just went out on a limb and asked him, "How many you have" (nothing to do with the ad really). He casually mentioned that he had many but he would like to get rid of only these 4. He then let me examine him completely (another reason why a complete physical is a must)

I must have counted at least 50!!! Spread all over his body.....back, abdomen, legs, everywhere! It wasn't so much ugly as it was sad! For no fault of his own, he was bestowed upon with these fat deposits by someone higher up with a wierd sense of humour! He wasn't even overweight. He was in fact quite fit other than these little fat deposits all over his body.


The reason for him to get the 4 out was that they were the one's that could be seen. Everything else would be covered by his clothing so he was not bothered about them. He had even tried exercising and weight loss techniques for losing these fat buddies of his because someone had told him that they were fat, but forgot to explain that they had nothing to do with being overweight or obese!

This is one fat problem you can't get rid of by going to the gym or walking it out!!