Before I begin this post, let me, for the benefit of non-medicos, explain what a NG tube and an Abd Drain is. NG tube is used to decompress the stomach by simply acting as a tube with holes through which stomach contents come out through the nose. Its used routinely for obstruction in the abdomen.
Abdominal Drain is a tube which is left in the abdomen and comes out through the skin and is used to remove pus or fluid from the abd cavity to a bag outside usually after a surgery.

Now that my title makes sense, let me take you into the abdomen of this old lady who came to us after being operated at a pvt hosp some 14 days prior to coming to us. She had stones in her pancreas and was operated and a major procedure was done which involved joining two pieces of intestine and draining the pancreas.

When she came she had a NG tube through the nose and an abd drain in her already as she wasn't recovering. The drain was draining some amount of pus and the NG tube was draining an abnormally large amount of fluid.

To cut things short she wasn't doing well and we suspected that the intestinal anastomosis (joining the two) was leaking so we decided to re open her up.

What we saw at the table shocked even my rather cool Dr. Lefty. The NG tube which is supposed to be in the stomach had somehow come right through the stomach wall and was lying in the abdomen. The fluid that was being drained by it was actually the abdominal cavity and it was frank pus.

Speculation was that there were two possibilities:
1.) The stomach wall had died and given way and the NG tube was therefore in the abd.
2.) The NG tube perforated and basically tore through the stomach wall.

Anyway, the tear was stitched and the drains replaced and the previous anastomosis was alright so nothing else could be done.

The lady passed away in the ICU. It was a very very strange occurence and till date no one knows how that tube came out of the stomach. For once it was not a Municipal Hospital at fault. 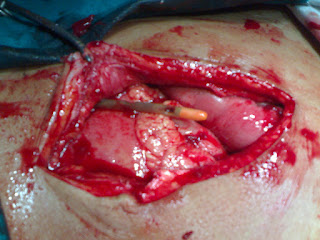