Any vaccination, including the one's we take as children, are known to have a varied spectrum of side effects. How your body reacts to the vaccine is completely individual and cannot, per se, be generalised. However, we can document expected reactions; which is what gives the vaccine a green signal to be safely used in the general population. 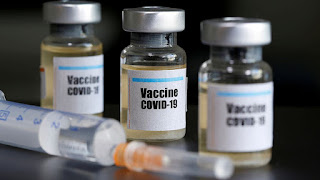 As expected, the Covid vaccines are creating quite a stir in the community, with a large variety of side effects being reported, right from having absolutely no reaction at all (with people joking about being given only distilled water) right up to chills, rigors, fevers and intense body and joint pains! The strange thing is this - some people will have these reactions right from the first dose while some get the severe reactions only with the second. How can we possibly explain this? Let me try.
Imagine a phobia that you are currently at peace with. It may not even be a phobia but just something that frightens you. Let's say you are scared of owls. 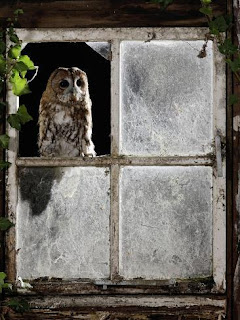 While you are trying to sleep at night, let's say an owl decides to come visit your window and just sits there, looking around. You would be scared, sure. You would probably muster up the courage to try and shoo it away or just leave the room to come back once it had left. Now, imagine this happens again the next week. Same owl, same piercing eyes, same rotating head! Staring right at you with it's talons perched on the window sill. Your reaction this time is likely to be much more pronounced. Your heart beat will race, you might sweat a bit, you might hyperventillate, you could even have a full blown panic attack. This is because your system is now aware of the fear and has seen it once before. It is primed to attack and act fast as soon as it sees the first offending stimulus return.
The first dose of the vaccine is like the first time you see the owl. The immune system takes notice of the foreign impulse and takes some precautions to ready your body to deal with it but the second time it is already primed to respond to the stimulus that it now recognizes. Basically, the first dose is eduating the system to be on the look out for the stimulus. This is building the immune response from the ground up. Therefore, the reactions to the first dose may not be very severe at all. The body produces antibodies, but also starts to generate immune cells called B cells to make targeted antibodies. This takes time -- a process known as maturing. Then, the second time you are given the vaccine, those cells are at attention like a clone army and can immediately start producing a huge response, which is why people feel like they have been kicked in the teeth.
When the immune system detects a virus, it will dispatch cells and molecules to memorize its features so it can be fought off more swiftly in the future. Vaccines impart these same lessons without involving the disease-causing pathogen itself—the immunological equivalent of training wheels. 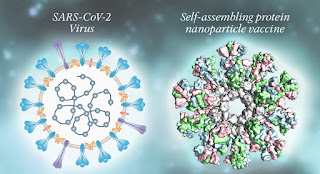 The flu-like symptoms that come with any viral infection are not caused by the virus itself. They are caused by the body's response. The fever and muscle aches come from inflammation, which in turn is a sign that immune cells called T cells are sending out an alarm in the form of signaling chemicals called cytokines. These symptoms mean that your immune system is revving up and the vaccine is actually working.
Detailed explanation of how this works is below. Everything from here on in will be technical:
Once delivered into the upper arm, the mRNA (from the vaccine) instructs the body’s own cells to produce a coronavirus protein called spike—a molecule that elicits powerful, infection-fighting antibody responses in people battling COVID-19. 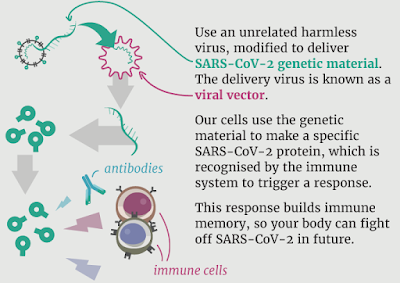 To ensure safe passage of mRNA into cells, the vaccine makers envelope the molecules in fat bubbles called lipid nanoparticles or the vector. These bubbles don’t resemble anything naturally present in the body, and so they trigger the fast-acting immune cells, called innate immune cells, that are patrolling the body in the circulation looking for any foreign matter. Once they spot the nanoparticles, these cells dispatch molecular alarms called cytokines that recruit other immune cells to the site of injection. The influx of cells and molecules makes the upper arm swollen and sore. The congregating cells spew out more cytokines still, flooding the rest of the body with signals that can make system-wide symptoms appear such as fever and bodyache along with fatigue.
The innate immune system acts fast. But its actions aren't very long-lived: These cells just pound on anything that looks a little strange. Within a day or two of the injection, they start to lose steam. Cytokine production sputters; side effects start to fade. Around this time, innate immune cells start to pass the baton to another division of the immune system, called adaptive immunity, which includes antibodies and T cells, that will launch an attack on specific pathogens if they try to infect the body again.

T cells and B cells, the cells that make antibodies, need several days to study the foreign materials features before they can respond. By the time the second injection is given, adaptive cells are all prepped and raring to go, and faster to react. Some of these cells have even been lingering at the site of injection, out of suspicion that their target would return. Stimulated anew, these sentinel cells will blast out their own cytokines, layering on an extra wave of inflammation. In some people, these complex reactions can manifest in fevers, aches, and prolonged exhaustion. The side effects also signify that both branches of the immune system are being engaged as they should—cementing the memory of the coronavirus’s spike protein in some of the body’s most powerful cells.
That’s a big part of why vaccine boosts are so important. Although the first shot stimulates both innate and adaptive immunity, the second injection reminds B and T cells that the threat of the offeding organism cannot be taken lightly, and ensures that the sharpest and strongest immune players will be used for any subsequent response.
Basically they’re asking, ‘Why is this happening 21 or 28 days later? I thought we took care of this four weeks ago,’ 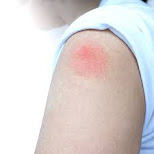 Having said this, this is by no means meant to be a deterrant to take the vaccine. On the contrary, a few days of side effects could very well protect you from life threatning infections. Also, the so called "Covid Arm" only looks scary. It actually causes no effects at all, other than looking red and angry and it's very rare!
This also seems to answer the very important and nagging question that even healthcare workers seem to be struggling with: Do we need the vaccine if we already have antibodies? Well, of course you do! It will cause no harm and will only act as a booster as explained above! So, will you take the vaccine when it becomes available to you?