I came across a man who was recently married and was unable to concieve. His preliminary reports pointed towards azoospermia (an absolute zero sperm count) and bilateral varicocele. He was from the middle east and had a diagnosis of infertility. He knew about the varicocele and had heard that in some cases its responsible for azoospermia. He also mentioned that he sometimes saw semen in his urine (retrograde ejaculation). He had no issues with potency and secondary sexual characters were well developed.

He insisted on a full workup and even consented to a testicular biopsy. He also mentioned a procedure he had undergone back home, but due to language issues, we weren't very clear what it was. Until we took him on the table for the biopsy. He was branded. With a red hot iron rod. Thinking that it would cure the varicocele and all his problems! 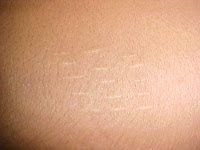 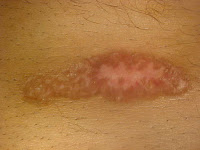 These are the actual pictures on his skin. The first one is something he underwent when he was small. It was a pattern of five such prints on his upper back, supposedly to cleanse his blood.
The second one was at his left lower abdomen, and was done specifically to cure his varicocele and increase his sperm count!!

The process of branding the skin is known as scarification (scaryfication is more like it). Generally voluntary, though often under severe social pressure, branding may be used as a painful form of initiation, serving both as endurance and motivation test (rite of passage) and a permanent membership mark.  Endorphins can be released in the scarification process that can induce a euphoric state. 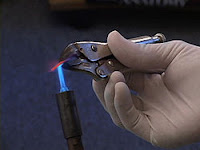 The longer for a wound to heal, the more pronounced the scar will be. Thus, in order to have pronounced scars, the wound is kept open for a protracted time. This is by abrading scabs and irritating the wound with chemical or natural irritants such as toothpaste or citrus juice. All this can be understood when it comes to the tribes and ancient cultural practices.


What amazes me, is that this very same practice is being carried out in the modern world with the tag of it being a cure for certain diseases, which now have a scientific basis and known cure!
The line between modern medicine and traditional values is running very thin and sometimes these practices may be lethal. (Read here for the post on alternative therapies taking lives)


Another strange fact is this, if the person getting branded develops an infection, the tribes apparently have a code - LITHA - literally translating to leave it the hell alone!!

a very informative post..an eye opener... have seen many people getting branded on their foreheads...maybe for epilepsy.

@Nalini Thanks. You're probably right about the forehead branding. Its also done as an initiation in some parts of africa.
@rlbates Thank you!

@Nalini Thanks. You're probably right about the forehead branding. Its also done as an initiation in some parts of africa.
@rlbates Thank you!

A professionally crafted logo design portfolio is one of the greatest blessings for a company; whether it is big or small. It gives them an identity of their own and makes them different from others.p