Fish bone In His Elbow!

Out of all the places for a fish bone to go and get stuck, this poor man could not have asked for a worse location. It's quite common to have a fish bone stuck in your throat while eating, but the question almost everyone asked me the moment I mentioned this is, How in the world did he manage to get it stuck there?!?!?

Well, the explanation is quite simple. All it needs is a little bit of lateral thinking. It's like the question of a plane crashing and burying the survivors, or the rooster that laid the egg that both neighbour's wanted to claim.....

The man was not eating the fish but was a fisherman who was chopping it into pieces to sell in the local fish market, when the fish decided to do one last heroic act before dying and made the bone fly into his elbow!!
He was in obvious pain, with some amount of swelling and infection forming around the wound (his cleanliness was no where next to Godliness).

He actually presented at the clinic and not the hospital. With limited resources, all we were armed with was an X-ray of the offending bone (lying close to the ulna) and our tactile sensations. We had a sonologist in the next consulting room, so we tried to get it out under sono guidance. We could locate the bone but the sono being an echo study, the moment we tried to insert the forceps to hold it and pull it out we interrupted the image. 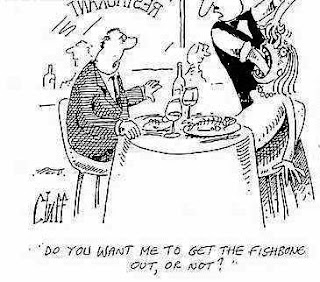 Finally it was decided that the only simple way to do it would be under Image Intensifier and fluoroscopy as he was not ready for a local exploration at that point of time. Well, he was taken to the hospital and it was successfully removed. He decided to take the offending bone home and said he would make a locket out of it!

Fisherman don't smell of anything else but fish, always!! Nice post though! Funny, yes!

Things we get to see in medicine. Awesome!