A couple of days ago, I was to travel to the state border to a small town called Bhilad, which is next to Valsad (both of which birdy refuses to believe, exist) to perform surgery there.

When you travel to places you've never heard of before, you know things aren't going to go smooth during the day. The start was horrid with the hospital being unable to find our instruments which we needed to take there. Boss' driver, Wireface. had sweetly forgotten to have them picked up the night before. Well, the one box that we found was lugged by be by local train to a predestined spot where we were to meet and commence our drive to Bhilad.

The drive was a fairly nice one, sure some traffic with trucks driving in the fast lane, but green like you wouldn't believe possible, almost forest like and smooth highways.

When we almost reached the Gujrat border, we came across a check point at which was boldly printed, 'Swain Flue Check Point' in bright red. Not only did they spell really badly, they almost stopped no one crossing it. We had a good laugh at the sign and reached the hospital soon after, where we proceeded to tell the locals about it. 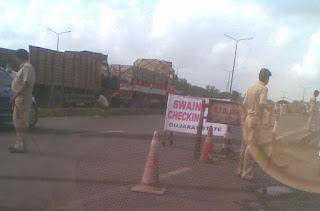 As the day was supposed to go, it turned out that the docs posted at that check point were from the very same hospital where we were to operate.
Anyway, the surgery went off well and they insisted we have lunch with them and see the new farm house that the doc was building for himself. The way to the farm house was like going through a jungle where we saw this huge one foot lizard. As the day was supposed to go, the lizard died under one of the car tires!! 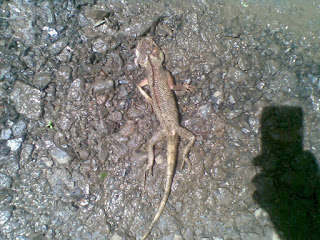 Lunch was amazing with desi Murg (village chicken), Paplet (pomfret) and Mutton Kebabs....Yuummmm The house was really great with the hall ceiling being at 2 floors height, which really is just a huge thing to have so close to the city.

All in all a great experience and came back without Swain Flue to boot!

I can almost imagine birdy saying that the villages don't exist...so funny. also the image of the lizard above the description of food for one instance gave me the impression that you ate the lizard too...

y is ur blog blocked to general public?