I read this piece on male pattern baldness this morning where Dr. Phil (yes the one one Oprah) said that 70% men would rather amputate a limb than go bald. 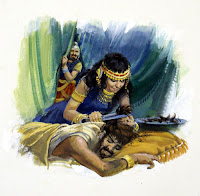 The ultimate fear of some males happens to be baldness. I wonder why? It's not like Samson's story was ever proven to be true. Or even if most politician's (excluding Manmohan Singh for obvious reasons) appear to be bald. What is there to fear?


Some women I know, love the smooth bald feel on their man's head! I think it gives some people character. Agreed, Sehwag and Harsha Bhogle seem better off after their treatments but would you really bother if they hadn't gotten it done? It would not have made an iota of difference to me!

Apparently, there are various new ways of getting the treatment done....Old methods involved literally cutting off the back of your head, where the hair growth is maximum and transplanting it to the front. Nowadays, though, they have hair follicle pick up and implantation over the bald patch (almost sounds like fertilization to me). They have even discovered the gene causing male pattern baldness. Maybe a cure is at hand but it's far from ready now.I know someone working at a hair restoration clinic in Bombay and he swears by the results and the painlessness of it all.

I even got an enquiry from somewhere in Africa for the same. Maybe it's time has finally arrived.Men are looking at ways to prevent baldness and until that arrives, there is always restoration. I'm just pleasently surprised at the number of centres mushrooming up in Bombay for the same.

All the best to my bald friends!

Other than treating male/female pattern baldness, Hair Transplant surgerymakes it feasible to restore hair on other areas of the body too, e.g., eyebrows, eyelashes, chin, moustache, sideburns, chest and pubic area.

Wow great. I hope many people will get advantage from your post. nj plastic surgery center.

Doing good job.Plastic surgery center helps alot for all those who wants to enhance their beauty.
Hair Restoration|FUE Hair Grafting In Dubai

Thanks a lot for this beauty Enjoying article with me. I am appreciating it very much! Looking Forward to Another Great article. Good luck to the Author! All the best.
Hair Removal

Thanks for sharing this great article, I really enjoyed the insign you bring to the topic, awesome stuff!.
FUE hair Transplantation in India | Best Hair Transplant in Bangalore

This is a great post. I like this topic.This site has lots of advantage.I found many interesting things from this site. It helps me in many ways.Thanks for posting this again. FUE Hair transplant abroad