Abdominal Drains are becoming a menace!

I've haven't been blogging for a while now but this is not due to lack of eventful happenings. I would blame it squarely on having no time to breathe let alone write!

Getting right into it, most of my regular readers would realize that the post on Abdominal Drain or Nasogastric Tube has got the most readership to date. It also has the most horrific pictures.

I guess I have a love-hate relationship with Abdominal Drains as this post will show.

Not too long ago, we had a patient who had a very bad stomach pain with severe constipation of recent onset. On the workup, he was diagnosed to be suffering from a low colon cancer. A straightforward decision for a resection and anastomosis was taken (cut and join for the lay people) and the patient underwent the surgery without issues and of course we put in an abdominal drain to prevent infection.

This is what happened!

It was fixed to the lateral wall of the abdomen. Where it was supposed to be fixed. Where it should have stayed. Where it generally always stays. But this is where I work you understand. It was done by someone else. But he came to us. The patient told us he was coming to remove the drain. As he was told by his doctor to do after 3 days. He had no clue. We had no clue at first.

He was taken to the dressing room to remove the drain. Only there was no drain! There was nothing on the surface except the hole where the drain should have been. I asked him if the drain had been removed and he just wanted a dressing. He insisted that he was here to remove the drain. We got a feeling that something was wrong. We sent him for an Xray. This is it. 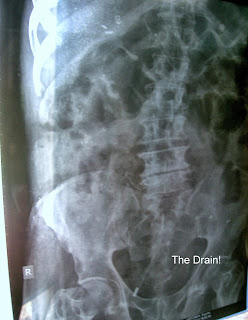 The drain had quietly and smoothly slipped inside the abdominal cavity. Inside. Without a mark or an ouch! Not even a sensation that the patient could feel. Just vanished into the body!

We knew this was going to be fun! We got him to a sonogram and tried to trace the drain but all we could see was the tip. We marked the area at the pelvis. We took a small incision and started digging. We emptied his bladder first, of course.

After some amount of fishing, this felt literally like looking for a needle in a haystack. Ultimately, we had to leave aside the instruments and move to our trusty fingers. They're the least traumatic you see. We hunted and hunted and finally felt the elusive tip. It took us about 10 minutes more to coax it out as it kept slipping back inside, but finally out it came. 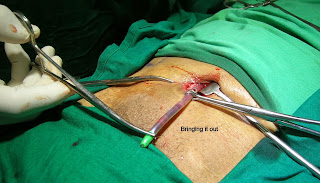 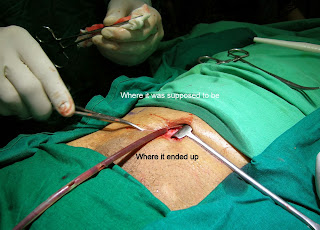 That is how long it was. Luckily, it wasn't adhered to anything on the inside. The patient was discharged the same evening and made a complete recovery.

I don't think I'm going to use abdominal drains in the next few surgeries. Anyway, there is a lot of study as to the real utility in routine cases. What do you think?

Bit of an Achilles heel isn't it. We all know it has it's side effects but not many of us dare not to put a drain in. Do a prospective multiinstitutional comparative study, you will have your answer. Dr Amit

Thank God he was ok, that's all I can say - with my layman knowledge:)