1) Attending medical conferences for the sake of credit hours: No heed given to the topic at hand. If Bluetooth technology was made compulsory at these conferences, we could have a round of counter strike on the phones while the lecture was being delivered, or play Texas Hold 'Em Poker with each other. If no one participates, one can at least complete the entire angry birds sequence.

2) Accumulating above certificates: taking great care that there are no spelling mistakes where the name should go. We didn't even bother this much when we went to register for our Aadhar Cards (the western equivalent of Social Security Numbers)

3) Maintain these certificates: This would include locking them up in our filing cabinets, bank lockers, under the mattress, just out of reach of the children and dogs (God forbid you would have to go and explain how your dog ate your certificate!). You get the general idea, more precious than stocks, bonds and gold certificates, these are! Heavens forbid, you fall short by 2 points and have to attend one more irrelevant conference.

4) DD: Demand Draft / Pay order: Of course, the MMC won't accept cash, lest someone think they are corrupt or can be bribed (like that never happens). So, its off to the bank to make a draft. It must be a Nationalised bank, it clearly states on the notice of the MMC. It's just a mere coincidence that there is one at the compound of the building where it is located. The kicker is that the bank would charge you about 72 Rupees to make the draft in cash. So, make it at your bank through your account, some wise people advise. Sure, I did that. It cost me 56 Rupees. Slightly less, enough to save for fuel to go to the office (Of course, this is possible only people like me who travel by bike, what with fuel set to touch 100 per litre soon)

5) Bright Spot: The IMA has been authorised by the MMC to collect applications on its behalf. Only for its members though. Good enough, we all thought. A lot of people benefited. Not me. You see, the MMC failed to mention in it's good news that they always embed something bad which can only be known if you read between the lines.

From here on, is my personal experience at getting this done.

6) The Problem: With draft and certificates in hand, I went to the IMA office for the renewal. Just as the person in charge was about to start with me (after about a 10 minute wait, while he was on some other planet apparently cause there was no one else there), he drops one on me. The IMA would not accept the draft. Only cash!! Right. What am I supposed to do with the draft then. Cancel it and return it to the bank. Alright, doable right? I called up the bank (I've learned to keep the bank landline number handy, just for cases like these). It's possible to cancel, he says, but I would be charged. It seems the charges for making a draft and cancelling are the same, i.e. 56 Rupees. I stood to lose 112 Rupees for no fault of mine. I know that this is not a big amount but it's now a matter of principle. Since, the MMC office is not too far from the IMA office, I decide to go there. It's about 4 o'clock now.

7) MMC office: I reach there by about 4.30, worried like crazy that they would be all ready to shut shop. Allow me to digress for a bit. The MMC office is a shame to not only the medical profession but any profession anywhere in the world. If I was to go abroad and describe to my fellow medical professionals where my registration was done, I would lie and say online. The office is on the second floor of a chawl type building, with the mandatory pan stains all over the staircase, with no obvious assistance for the disabled to reach there other than being lifted by someone. The interior of the office stinks of sweat, with gross leakage over its walls, spiderwebs hanging about, with no washroom in sight for any of the 20 people who work there. Coming back to my plight. There was a line of about 20 people waiting to get their papers registered. The layout as shown below: 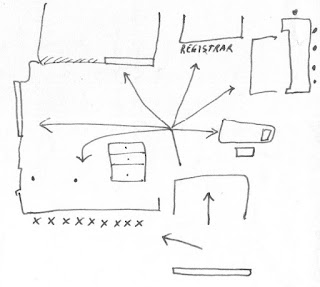 8) The Royal Runaround: As soon as I entered there was a line to my left. Assuming this was the place to be, I asked the lady for assistance. I was told to go on inside. Went in and stood at the desk on the right. No one there. Saw the board up ahead marked Registrar. Went in there. An old man, sitting at his desk told me to go to the door on the right for renewals. Good I said, finally an answer. Went there and stood in line. Luckily, I asked someone if their documents had already been verified. They had. Mine had not. I went back outside to the desk to find someone who would do it. No one there. Walked across to the left. Someone told me to wait and the person would come. No one said where though. Waited, it was nearing 5.15 now. I happened to read a notice saying the registration process would remain open till 6.00 pm. The office next to the registrars was the President's office. No one there either. Went back to the leftmost office. I was told the old man who spoke to me first was the registrar and he would verify the documents. He was sitting across the table from the guy who told me this, but did not budge. I asked him politely to please come back to his desk otherwise, the submission table shown on the right would empty out as all were itching to go home.

9) Indian Standard Time (late to start and early to finish): He gave his watch a glance and had the audacity to tell me, "Time's up!". Somehow, I controlled my annoyance and told him the notice outside his office says it's open till 6.00 and I had half hour left. 2 more Doctor's came up behind me for their verification. That spoiled his plans of leaving early. Anyway, he was back  and went through my documents. I had 3 sets. 2 for my parents and I for myself. Theirs went through without a problem. I had a certificate from a conference that had granted 8 hours for the duration of 4 days, but he signed off on it saying maximum 6 hours. 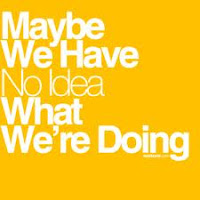 10) Clueless: Now, this is a certificate given by the association carrying out the CME, but it has to be passed and signed by the MMC. So, clearly they knew they were signing off on 8 hours of CME credits. Now, it seems, the maximum for this conference was 6 hours. If you are not going to give the 8 points of credit, why issue the certificate saying so in the first place. Just one more discrepancy in the MMC. Anyway, this meant that I fell 2 points short for renewal.

The procedure for both of these is to write an application to the Registrar and submit it to the office and they would get back in 15 days with the credit hours result. This was the primary reason for my trying to get the points out of conferences itself. This meant that I would have to go back to the office another day to submit the copies of the paper and European certificate along with the application.

12) It gets worse: I did that this Monday. I was shocked when I reached. Apparently, the notice of extension of the time frame for renewals (it's now extended to May 2012) was not published in most newspapers with the result that everyone thought 28th February would be the last day. The office was like a fish market with at least a 100 Doctors crammed inside like a jar of sardines! 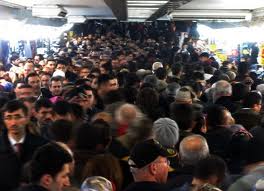 I quickly walked through some toes and submitted my application and left in shame. Now, to wait and see what happens after 15 days. I wonder, sometimes, if this is worth it! Keep reading for part 3.

any idea what is the procedure if u fall short of credit points...is there a fine to pay.....

No idea....I guess this is something people will have to update me about!