Kicked by a Horse!

I'm back after a long hiatus....and kicked about it. All it took to get me back to blogging was a horse! If only this had happened sooner.
I am sure this is common in the wild wild west, but this is the first time I've heard of someone coming into a clinic in Bombay because he was kicked by a horse!

What makes it even more strange is that the patient was a 10 year old boy, who was doing his daily chores when he happened to see two horses 'get into an argument' so to speak! He said the two horses were fighting apparently and he went to try and calm one horse down when the other kicked him in the head.
The kid was hit pretty hard and according to his mother, he was lying unconscious for about 10 minutes. He came around and had a huge swelling over his head and required stitches. 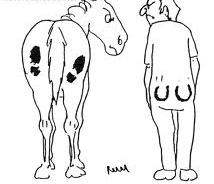 The only good thing to come out of it was that when the time came to take him in the O.R. and suture him, he wasn't the slightest bit afraid of the injections and instruments. What a way to get rid of fright! Maybe next time he would kick the horse back!! (No offense meant to PETA members)

He's doing well now and the wound has healed completely, but I doubt he's going to be riding a horse anytime soon. Maybe he'd just go hide in a tree. 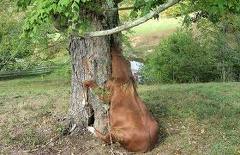 i loved this piece...funny, a real "mis-adventure"!:) I loved the fact that it was so light to read and that it had a happy ending:) Glad the boy is well!:)

Hi, we came across your blog, and appreciate the work you have been doing for online users and the Indian web community on the whole. We are pleased with the passion and interest you exhibit in your blog posts. The mature content of your blog has caught our attention and we want to give you an opportunity to be part of something memorable and exciting.

On this International Women's Day, 8th March at 4.00 pm, we are announcing the launch of a breakthrough healthcare service related to women health and would like to invite you for the same. The event will be hosted in Mumbai, at Taj Mahal Palace.

Not so cool though it was a funny event. I hope he was cured and got back his energy. And, hope he will not develop a trauma on horses.